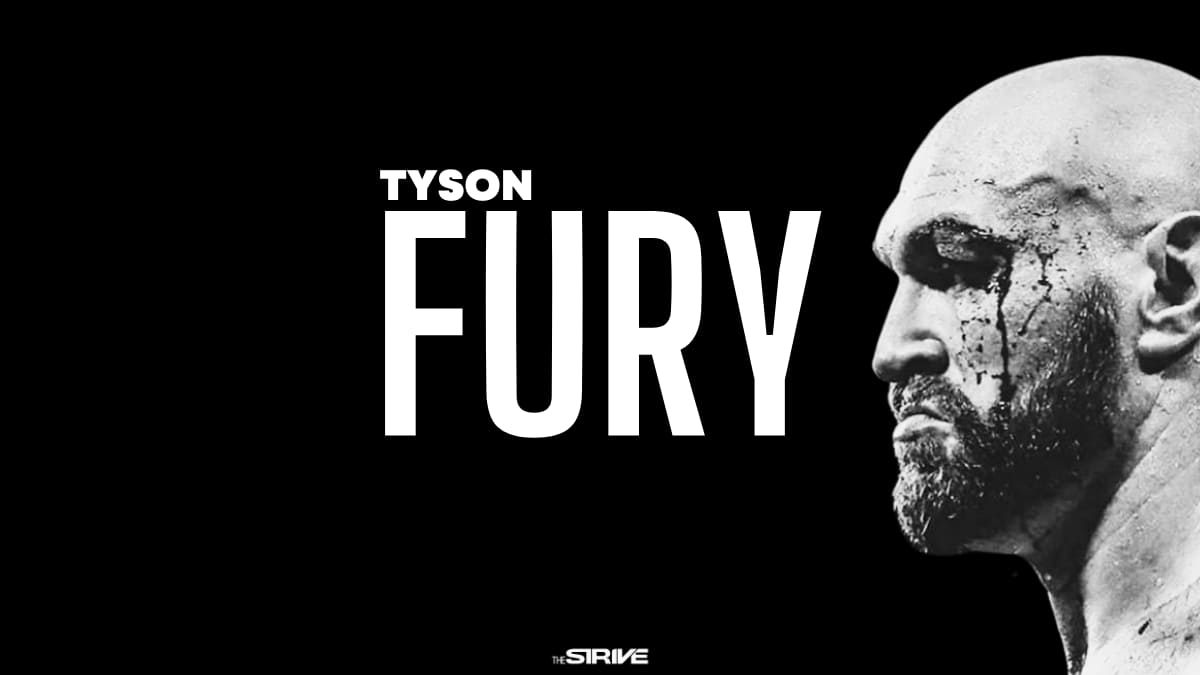 Tyson Fury, a.k.a. the Gypsy King, is the undefeated two-time heavyweight boxing champion of the world. He’s also currently considered the world’s best active heavyweight, and the lineal heavyweight champion by many media outlets. Not only has Fury managed to overcome an almost impossible 3 year gap in his boxing career, but he also managed to defeat his battle with depression, alcoholism, and drugs — clawing his way out of the darkness, and back into the limelight. Tyson Fury is a fighter in the truest sense of the word.

“Anything Is Possible With The Right Mindset.”

Tyson Fury’s fighting spirit along with his comeback story are truly inspirational. As such, we decided to honor the life lesson’s that Fury can teach us about self-belief, determination, and deciding to fight for the success we seek — which is why we’re publishing this powerful collection of Tyson Fury quotes. May they inspire you to get through the hard times and keep fighting for your dreams with the same heart and determination as Tyson Fury.

1. “I wanted to show the world that it can be done. Anything is possible with the right mindset. If you believe in yourself and you sacrifice and dedicate, with the right help you can come back.” – Tyson Fury

3. “Don’t ever doubt me when the chips are down, I can always deliver.” – Tyson Fury

“Don’t ever doubt me when the chips are down, I can always deliver.” – Tyson Fury

4. “I was way out of control. Something needed to happen, and it did.” – Tyson Fury

5. “If they want to take all the belts, they can take them, but they’ll never take what I’ve done and my achievements.” – Tyson Fury

7. “For all the people who suffer with mental health problems, I did that for you. If I can comeback from where I came from, you can too.” – Tyson Fury

8. “Everything is possible through God, and I’m living proof of that.” – Tyson Fury

10. “To be a legend is easy, to become that legend takes hard work and dedication.” – Tyson Fury

“To be a legend is easy, to become that legend takes hard work and dedication.” – Tyson Fury

11. “All I care about is providing and living every day. I don’t care about world titles, being a legend, or being a hero.” – Tyson Fury

12. “People can say what they want about me. But I’ve got a big heart and will keep going.” – Tyson Fury

“Racism is a sign of ignorance, in my opinion.” – Tyson Fury

15. “Although I think of myself as the greatest heavyweight, I do respect the legends of the past for what they did. But they are not my heroes.” – Tyson Fury

17. “My only idol is God, and I kick myself when I don’t pray regularly enough.” – Tyson Fury

18. “Exterior assets mean nothing if you can’t control what’s going on inside.” – Tyson Fury

“I don’t have any hobbies, my hobby is training.” – Tyson Fury

21. “You can feel like you have to try and be something you’re not because of the pressure society puts on you. And this is a big factor in the development of mental health problems. I’ve realized that I have to be me, no matter what.” – Tyson Fury

22. “I can sit here as a man who has experienced the highest highs and the lowest lows, and I know exactly what you’re going through. But my message to you today is, help is around the corner.” – Tyson Fury

23. “The past is in the past. What happened yesterday is history. I look forward to the future on daily basis.” – Tyson Fury

“The past is in the past. What happened yesterday is history. I look forward to the future on daily basis.” – Tyson Fury

24. “Foolish people follow the system, get caught up in media news, what the government wants you to believe and all the higher powers want you to believe and go down the same path as all the sheep in the cattle market.” – Tyson Fury

25. “You can have everything in life and feel like crap on a daily basis because no one can see inside the mind.” – Tyson Fury

Quotes are extremely effective at capturing and effectively communicating thoughts and ideas. Some quotes are motivating, while others inspiring. But most importantly, quotes can help us gain insights on the mode of thinking that helped someone achieve their goals.

With that being said, we hope these Tyson Fury quotes are helping you better understand the mindset of this exceptional fighter and champion. Now let’s get back to them…

26. “Every time I stray away from the Lord’s word, I find emptiness and darkness.” – Tyson Fury

“Every time I stray away from the Lord’s word, I find emptiness and darkness.” – Tyson Fury

27. “At the end of the day, we’re all brothers and sisters in God. What people do is none of my business.” – Tyson Fury

29. “God’s plan is always the best. Sometimes the process is painful and hard. But don’t forget that when God is silent, he’s doing something for you.” – Tyson Fury

“Once I set my mind to something, I always achieve it.” – Tyson Fury

31. “I’m not even scared of the devil. If the devil confronted me, I’d confront him as well.” – Tyson Fury

32. “Any man who puts a pair of gloves on deserves respect because lots wouldn’t dream of it. To get in there and go one-on-one, you need your hand shaking afterwards. Many men wouldn’t get involved.” – Tyson Fury

33. “Although there’s been a fighter before me called Mike Tyson, I’m my own Tyson. I’m Tyson Fury. I ain’t trying to be anybody else.” – Tyson Fury

“Although there’s been a fighter before me called Mike Tyson, I’m my own Tyson. I’m Tyson Fury. I ain’t trying to be anybody else.” – Tyson Fury

34. “I came into this fight tonight thinking, ‘You can only do your best in life and whatever is meant to be, whatever is destined, written in the stars for you, will be.'” – Tyson Fury

35. “There are 7 billion people in the world, but there’s only one heavyweight champion of the world, and that’s me.” – Tyson Fury

36. “I’ve acted like a gentleman throughout my career, and that’s all I can do as a man.” – Tyson Fury

“I’ve acted like a gentleman throughout my career, and that’s all I can do as a man.” – Tyson Fury

37. “If you want something that is very hard to get, you’ve got to sacrifice and dedicate and keep pushing no matter what, and never let anybody tell you you can’t. Because tonight, again, time and time again, I show you that it is very possible to achieve anything you ever want as long as you believe it in here.” – Tyson Fury

38. “Let’s just say I am the lineal champion of my era, and I can only be the best of my day, and I’ve done that. I am the best fighter in my era.” – Tyson Fury

39. “There’s always a way of beating Tyson Fury and I’ve always said it, very very clearly, you just got to knock me spark out, and if you can’t do that, I’ll win.” – Tyson Fury

“I am not here for no easy fights.” – Tyson Fury

41. “There ain’t a man out there born from his mother that can stop me or beat me.” – Tyson Fury

42. “I need the extra challenge and motivation of one punch and it’s over to bring the best Tyson Fury out.” – Tyson Fury

44. “For me, it’s about being a star, being a superstar, and not just winning a world title but becoming the best-ever British fighter this country has ever had. That’s what I am, and that’s what I intend to do.” – Tyson Fury

46. “My biggest mentor in my career is probably me wife, because without her, I probably would have went A.W.O.L a long time ago.” – Tyson Fury

“My biggest mentor in my career is probably me wife, because without her, I probably would have went A.W.O.L a long time ago.” – Tyson Fury

47. “Life is precious, and it’s beautiful just to wake up in the morning.” – Tyson Fury

48. “There’s never been someone like men in history — a fighter like me only comes along every 1,000 years.” – Tyson Fury

49. “I fight for those people, all the oppressed, depressed, alcoholics, drug addicts, I fight for all those people. I fight to give them hope everyday so they can wake up in the morning and know that somebody out there is banging for us… He is our man.” – Tyson Fury

50. “If people have love, they have everything.” – Tyson Fury

“If people have love, they have everything.” – Tyson Fury

Bonus: “Anything is possible with the right mindset.” – Tyson Fury

“Anything is possible with the right mindset.” – Tyson Fury

There you have it, the most inspirational Tyson Fury Quotes on the web to help you through those hard times.

May these quotes inspire you to keep fighting for your dreams, and help you mount your own comeback.

PS – If you enjoyed these Tyson Fury Quotes, then you’ll love these quotes from boxing legend Muhammad Ali.