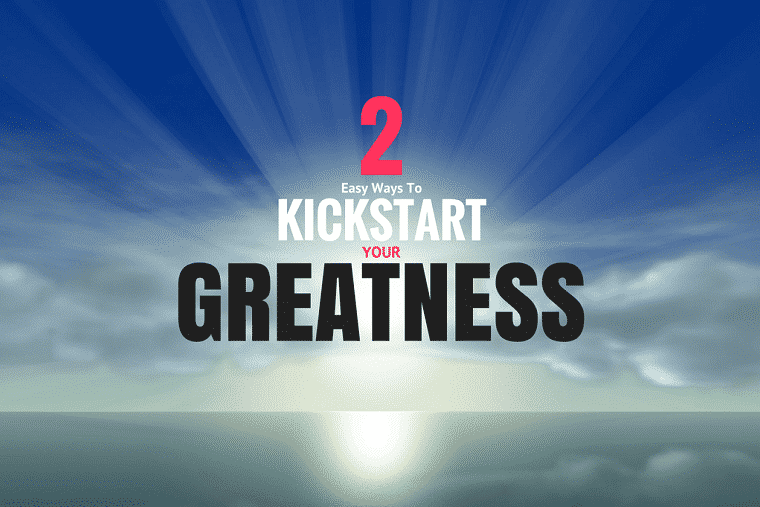 On my last post we did a thought experiment to help anyone tap their greatness in 10 minutes or less.  If that post sounds intriguing to you, go give it a read, it’s appropriately named ‘Tap Your Greatness in 10 Minutes or Less’.

In this post, I wanted to help connect the dots on some simple ways that we can actually go about making our greatness a reality.  As such, I am going to reveal 2 easy ways to kickstart your greatness.

The challenge many of us face in having our greatness become an actual reality, is that we just don’t know where to start.  Many people are burned out, overwhelmed, or have just slipped into a rut of sorts.

Many of us shy away from our greatness and fall into one of the above mentioned situations.  We primarily do this, because we either don’t believe in our greatness or we stop believing that it is even attainable at all.

Not only that, but we also feel that even if we could become an idealized version of ourselves, we typically don’t because we tell ourselves that we just don’t have the time, or that we lack the resources to make it happen.

If this sounds familiar, I’d like to respectfully suggest that we PLEASE stop thinking this way.  I know it is easier said than done, but if we persist in telling ourselves theses untruths, then we only rob ourselves of the potential that our lives could be.

1 – Believe in Your Greatness

James Allen, author of ‘As a Man Thinketh’, and one of my favorite writers of all-times, states, “The will to do springs from the knowledge that we can do.”  It’s a small but very powerful insight, that I believe to my core.  It’s also a phrase that I’ve found particularly true in most of my undertakings.

For example, when I was in college, I decided to major in Computer Science early on.  I decided to sign up for this major because I was told it would be a good field to go into.  I was also informed that the field would pay particularly well once I graduated and received my degree.  So, I signed up, and took my first computer programming course.

Now, I didn’t know a thing about computers, and I never really saw myself as a ‘computer person’.  Ultimately, I didn’t believe myself to have the thinking capabilities that one would need in order to become a good programmer.

Sure enough, not even half way through the semester I decided to drop out of the course and ditch that major entirely.  You see, I didn’t see myself as a programmer, nor did I believe I could program.  So, I saw the path to becoming a computer science major as impossible.  As such, I didn’t have the will to put in the effort to make it a reality.

Fast forward 10 years, and I now believe myself to be a ‘computer person’.  I even believe I can program.  As such, I have done a fair share of programming for both my personal and business pursuits.

The funny thing is, I never would have decided to get so involved with computers and programming, as much as I have if I never believed I could do it.  Fortunately for me, I had a colleague years ago, ‘show me the ropes’ so-to-speak on programming.  This person helped me believe that I could do it. Ever since that experience, I have maintained a belief that I could program and that I could learn all this complex ‘computer stuff’.

So back to this greatness stuff.  Basically, if more of us were to just realize and beleive that the awesome human within us is alive and well, and able to be made real, more of us would take the necessary actions needed to make our greatness real.

This leads me to the 2nd step needed to kickstart greatness.

2 – Act on Your Greatness

For simplicity sake, I’ll list a few generalized approaches one could take to get to their greatness.

For instance, if we listed as one of our greatness qualities, “Be a better father/mother”, some action steps that we could immediately take to bring this to life would the following:

We could either spend more quality time with the kids, or be more patient when they do the crazy stress-inducing things kids do. We could also take some time to actually think of ways to make our kids happier.  Once we come up with some ideas on what these ways would look like, we could then go do those specific things.  Additionally, we could look for ways to connect with our kids on a deeper level, you know, really be there for them, listen to them, make time for them.

As another guide on how to take action on our greatness let’s suppose we listed, “Become a better public speaker”.

Action steps we could take to bridge the gap between where we are now and where we wish we would be in terms of speaking better, would be the following:

Start attending a Toastmaster’s club.  Do more public speaking in personal and business settings.  Purchase a book on how to be a better communicator and speaker.  Study the greats, the speakers who really shine when it comes to executing on their public speaking craft, etc..

Go and pick up a book on financial intelligence and read it.   Or, we could starting reading more blogs on finance, economics, and financial responsibility.  Essentially, investing more of our time, honing in on those qualities that we would like to become more of.  These are only some of the simplest steps that one could take to get started.  The critical thing, is that we just get the ball rolling in the direction of our greater selves.

Boldness Has Magic in It

What if we chose just one term on the ideal qualities list we created in the previous post, and went after that today? What if we took action on bringing those qualities to life tomorrow?

The famous German writer Johan Wilhem Von Goethe once proclaimed “Whatever you can do, or dream you can, begin it.  Boldness has genius, power, and magic in it.”

Fortunately for us, we now have a more precise picture of what our greatness is.

With this increased clarity, we have the increased power to bring things to life.

Let’s see if we can come up with one new or different decision that we can make today to generate different results in our life.

You Have Greatness Within You

Our greatness is within us, waiting patiently for us to say the word, to make the commitment to tap it, and take the necessary action to bring it out.

Welcoming greatness would be to heed Goethe’s advice, and to just begin doing something, anything, NOW, to bring the great human residing within us to life.

I’ve once heard that we don’t have to be great to start, but we do have to start to be great.

Imagine if we had absolute trust in ourselves and in our ability to achieve the great things we have envisioned for our lives. Our greatness is awaiting permission to be tapped; we should grant it that wish. Our world will be better off because of it, and quite frankly, our world needs more if it.

So what are you waiting for?  Go kickstart your Greatness!

P.S. If you’re open to sharing, what would be just one action you could take today to kickstart your greatness?

Related Topics:
Up Next

10 WEEKS OF COLD SHOWERS AND THE SHOCKING BENEFITS