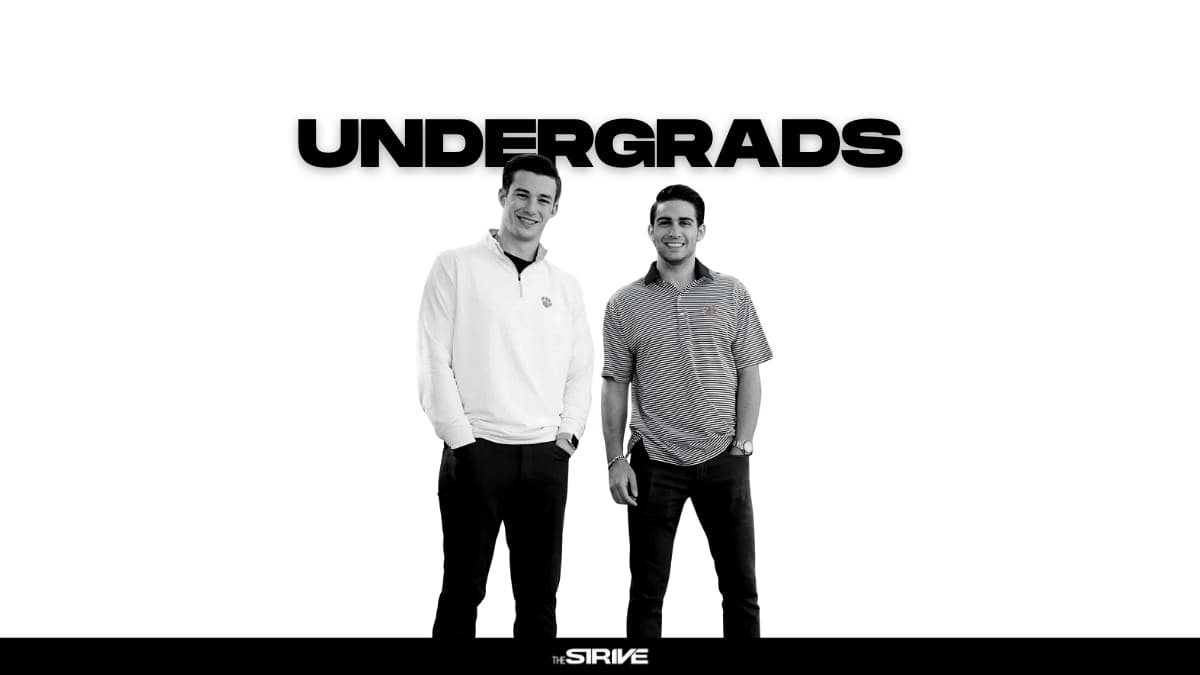 Imagine starting a side gig with only $200, and then just two years later, having that business boom during a pandemic. Well, the founders of Undergrads did just that, here’s how…

Tom and Chris began their moving business, Undergrads, while they were undergraduates themselves. As seniors studying Industrial Engineering at Clemson University, they knew firsthand how difficult it was to manage their course load and a job. On top of that, most of the jobs available in their area were low-paying, minimum wage jobs without flexible schedules.

One day, Chris’s mother had to hire movers for a simple move across town and a lightbulb went off — why not provide cheap, labor-only moving services? Both Tom and Chris were looking for ways to invest in themselves, even though they couldn’t afford a moving truck, they realized that people would be willing to provide their own trucks if it meant saving money on their move.  They started by offering their services on craigslist, and received some great responses.

When they saw how quickly the interest was growing, they decided to recruit a couple of their buddies and start the student moving service. The only issue was that they were due to graduate soon, so rather than giving up on their budding business, they decided to work on it part time while accepting positions at Ernst & Young and UPS.

Growing and Going Full Time in a Pandemic

“At the time, we thought our stable jobs were the ultimate career goal. I was doing project management at UPS and Tom was leading great initiatives at Ernst & Young. But we couldn’t deny the amount of success we were seeing with Undergrads. There was so much potential associated with it. So, we left our jobs and are so proud to see our accomplishments.” – Chris Dyer

Growing a business while working full time is not an easy task. To manage it, Tom and Chris would wake up at 5:30 every morning to work on Undergrads before heading to work. In short, they hustled.

During this time, the company grew rapidly — they were constantly hiring new movers to keep up with the demand. Then, in August 2019, Undergrads led a three-week long move for the largest student housing project in the United States. Coupled with their 300% year over year growth, they knew it was time to fully invest in themselves. So, after 2 years of growing Undergrads as a side hustle, they made the difficult decision to quit their jobs and continue growing their company full time.

When Tom and Chris quit their jobs, they anticipated some difficulty with the transition. What they didn’t expect was for a global pandemic to hit them only months later. While the pandemic was extremely devastating for many businesses, Undergrads was able to continue growing and even found themselves in a place where they could help their students who were most affected by the pandemic. Because of this growth, they decided to give back, by contributing almost $10,000 of scholarship funds to 8 of their Undergrads.

The COVID-19 pandemic was absolutely devastating for many small business owners, but Tom and Chris managed to get ahead of the curve and set themselves up for success. Throughout the pandemic, they observed how other countries were reacting to legislation and infection spikes, allowing them to identify trends in public reaction. Those observations helped them understand where to keep their investments and where to pull out in order to maintain a healthy cash flow. If a location was succeeding, they would double down there, but if it was failing, they would quickly shut it down. They made the decision to launch more locations than anticipated to help drive revenue once everything reopened and customers began to move again. By doing so, they were able to spread their bandwidth between multiple locations, so that they could easily support their new markets once everything was fully operational.

Greatness from a “Small” Idea

“Don’t be afraid to run with a seemingly small idea. Undergrads literally started with us posting moving services on Craigslist — now we offer services across 3 states with 500 movers.” – Tom Mumford

Even though they’ve had a difficult journey, Undergrads’ growth has made everything worth it. It’s been 4 years since they started business and they’ve gone from personally providing moving services to having a team of 500 students performing these moves every day.

Owning a business is a daunting goal for so many people, but it starts by taking those first small steps. Even though it’s important to look at the big picture, it’ll feel impossible if you don’t have manageable steps planned. For Tom and Chris, that first step was offering cheap moving services on Craigslist. Such a simple idea and now it has grown onto its own platform. With small ideas, it can seem pointless to try to grow anything out of it. But with the right mindset, you’ll be able to see small ideas for the potential that they carry, a necessity for any future business owner.

Perhaps the most important asset to their success has been their ability to keep moving forward during difficult situations. They attribute this to their discipline, grit, and ability to self-motivate. Working off of external motivation alone is one way to prevent yourself from moving forward in your entrepreneurship journey. As an entrepreneur, your gratifications will come late, if ever. So if you need motivation, it will have to come from within. Tom expresses how most of his work was fueled by his internal desires to succeed and his own beliefs that him and Chris have what it takes to “make it.” But there are also plenty of times where your fatigue will prevent your intrinsic motivation from showing through; these are the times where you need to rely on your own discipline to get things done.

Discipline, however, is a learned skill. For Tom, he was able to develop it as a student athlete on the wrestling team and now maintains his discipline by leading a healthy lifestyle. For Chris, he practices his discipline by reminding himself of his goals every day. Although it’s not always easy, remembering what he’s working towards makes it easier to deal with the various challenges faced by business owners. Without this discipline, Tom and Chris wouldn’t have the resiliency they exhibit today.

Having a vision, taking a leap, and embracing the discipline needed to see things through has helped founders Tom and Chris transform Undergrads into the inspiring success story it is today.

Now, Undergrads is an innovative, labor-only moving company that uses a gig-economy model to provide affordable moving services across North Carolina, South Carolina, and Texas. The Undergrads team consists of student movers who now have the opportunity to receive a high-paying, flexible job while pursuing their degrees.

To learn more about Undergrads, check out their website here.

55 BADASS HARD WORK QUOTES TO FIRE UP YOUR WORK ETHIC

55 UPLIFTING QUOTES TO HELP YOU LIVE YOUR PURPOSE

25 PERSEVERANCE QUOTES TO HELP YOU NEVER GIVE UP AGAIN

50 MOTIVATING MILLIONAIRE QUOTES FROM THE SELF-MADE

25 PERSEVERANCE QUOTES TO HELP YOU NEVER GIVE UP AGAIN

50 MOTIVATING MILLIONAIRE QUOTES FROM THE SELF-MADE

35 INSPIRING QUOTES ABOUT LIVING LIFE TO THE FULLEST

The #1 regret people mention while lying on their deathbeds is, “I wish I had the courage to live the life I...