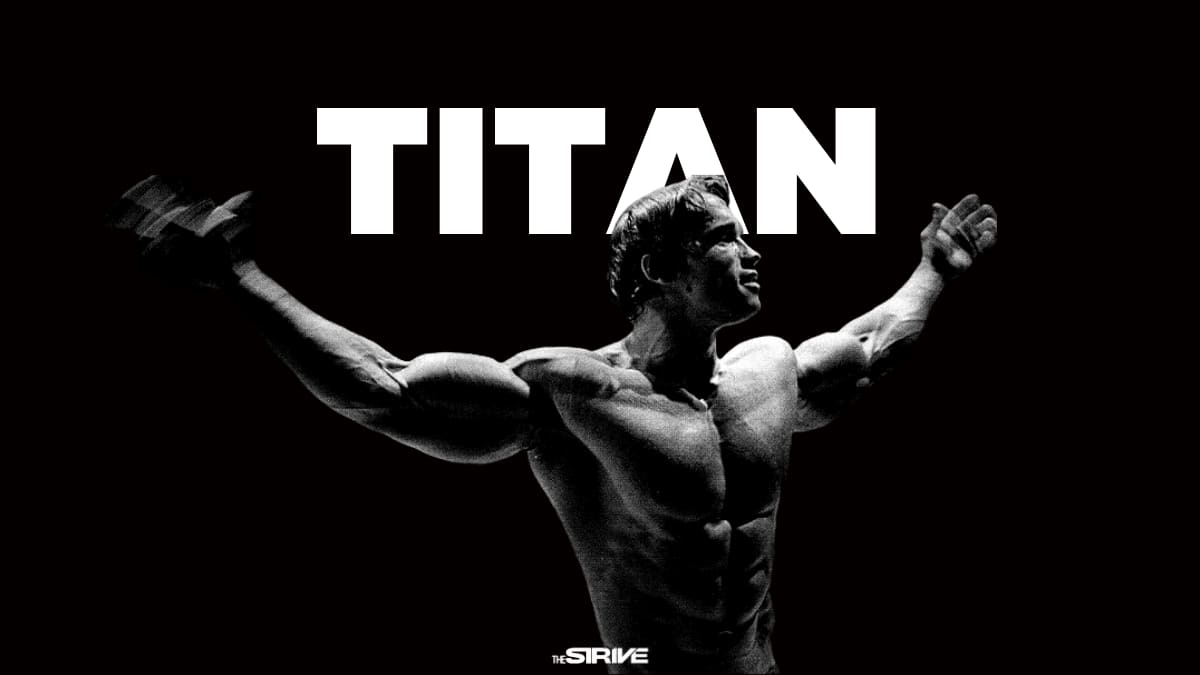 So you want to learn how to become a Titan?  Excellent! But know this, we’re not talking about the type of Titan of the NFL variety. In addition, this is not an application to join the pantheon of Greek Deities. Nor is it related to the popular Anime ‘Attack on Titan’.

Nope, the type of Titan we are referring to, is a modern day Titan. You know, the type of person who is a juggernaut, influential, or more simply put, a badass at what they do.

So, if you are here because you want to learn how to become a Titan of your industry, your craft, or your life — If you’re tired of playing small with your life, and you’re ready to grow, stretch, and become more than you are, then keep reading.

Before we go further though, I want to quickly elaborate on where the word ‘Titan’ comes from.  If you are a sincere student of achievement like I hope you are, this information will be useful to you.  It is context that will be helpful to you as you journey towards becoming a modern day Titan.

So here we go:

According to a handful of scholars, the word Titan stems from the Greek verb “teino”, which means to stretch.  There are a few other interpretations, but they are less persuasive.  So, I will only focus on this interpretation of the word as it relates to our modern day Titans.   I’ll be doing this both for the sake of brevity, and because the life lesson from this first interpretation of the word’s origination, precedes the order and importance of the lessons that can be learned from the other ones.

How to Become a Titan

With your forward thinking mind, you’ve probably already guessed what the straightest path to becoming a modern day Titan is.  If you guessed that the straightest path to becoming a Titan is to simply espouse the essence of the name’s origination, you’d be right.  What I mean by this, is that to become a Titan, you simply need to incorporate the meaning of the word stretch, into your every action.

If we want to become Titans, we must commit ourselves to obsessively reaching, trying, striving, to be better than our former selves.  Such actions are the underlying theme behind the word Titan.   In short, we must constantly be stretching ourselves.

“Hard work is the price that must be paid for success. You can accomplish anything and become anyone, so long as you’re willing to pay the price.” – Atlas Rowe

An excellent word that makes stretch more meaningful and actionable is effort.   From my observations, it doesn’t matter what the undertaking is.  Anyone in any field can become a Titan.  You can become a Titan Teacher, a Titan Corporate Trainer, a Titan Executive Assistant, or a Titan Customer Service Rep, the field doesn’t matter.  All that is needed is the will to put in the effort to be the best at what you do.  You must be ready and willing to sacrifice great levels of effort towards your skill, if you wish to become a Titan.

The challenge to becoming a Titan is a lack of awareness of the levels of effort needed to become phenomenal at one’s craft. The first three people on this list are alive today, so you can still watch and study them closely.  The last Titan is no longer with us physically, but his spirit lives on, and is a powerful example we can still learn from.

If you observe Gary Vaynerchuck, who can be considered a Titan of social media and branding, you will notice he is consistently stretching himself.  He works long days running multiple companies.  If you look closely, you’ll notice how he’s always documenting himself, constantly brainstorming, while unfailingly grinding away behind the scenes on new books, projects, or speaking events.

If you are not familiar with Gary Vaynerchuck, he basically started out working for his parent’s liquor store, and ended up taking that business from a 3 million dollar a year company to a 60 million dollar a year company in a few short years.  While grinding away working for his parent’s liquor store, he created an online video show, called Wine Library TV, which quickly became an internet sensation.   If you follow any of what Gary does, it becomes apparent quite quickly why he’s been able to become the Titan he is today.  He’ll also eventually sum up it up for you, when he utters a phrase he’s become known for saying often…..” Go hustle your face off”.

“I am grinding while your sleeping.”  –  Gary Vaynerchuk

Ray Lewis, the former professional football player has an excellent story about how his stretching allowed him to become a Titan.  For Ray, his initial stretching came in the form of pushing through pain.  Stretching himself through pain in his childhood led him to become the physical behemoth that would dominate on a professional football field for 17 years.

Ray’s stretching also came from pushing past the pain of a torn tricep injury, to help lead his team to victory in Super bowl XLVII.  When most people would back off from the pain and discomfort caused by such an injury, Ray Lewis, stretched himself to get through it, and conquered the situation by applying extra effort to make up for the physical handicap.

The most noticeable Titan traits that Ray Lewis exhibited can be easily seen when watching his performance on the field.  What you’ll notice about Ray, was his commitment to becoming the greatest linebacker in history.  Ray would translate that desire into an almost superhuman effort on the field.

If you were to create a hybrid human by cloning the genetic DNA of Freddie Mercury, Tony Robbins, and Mahatma Gandhi, you’d get one Robin Sharma.  If you’ve ever observed him, I am sure you’ll agree.  In the event that you have never heard of him, he is one of the top ‘leadership guru’s’ alive and rocking today.

What many probably don’t know about this leader of leaders, is how he arrived at his current status of Titan.   Robin was initially a lawyer who appeared successful on the outside, but felt unsuccessful on the inside.  Robin had the sense that he had more to give to this world.  The lack of fulfillment in his life would ultimately fuel his great efforts to break free to become the person he was meant to be.

If you were to study Robin closely, you would notice that what allowed him to kick start his iconic journey to Titandom, was his ability to grind.

His rise to Titandom didn’t come immediately, as it wasn’t until well after his second self-published book, ‘The Monk Who Sold His Ferrari’ was picked up by a major publisher, that he departed from his profession as a lawyer.

Moral of the story, he stretched his dreams, his actions, and his effort levels to break him out of the ordinary, and into extraordinary living.  Robin Sharma’s stretching, striving, and extra grinding lead him to rise to the level of the Titan.

“Ideas don’t work for people unwilling to do the work.” – Robin Sharma

Theodore Roosevelt was one of the greatest U.S. Presidents ever.  There is no debating it, Mount Rushmore proves it.

What many forget, is how much Theodore Roosevelt had to overcome to rise to his greatness.

When he was just a kid, he was told by his doctors that he was too weak, sickly, and asthmatic, to live a normal life like his peers.

He was instructed by his doctors, to avoid participation in any physical activity, as they feared it would worsen his condition; potentially leading to his death.

But, he did the opposite.  Instead, in just about every capacity, he pushed his physical limits.  He did so as an explorer, a hunter, a cowboy, an author, a soldier, a judoka (practioner of judo), and as politician.  Even in his presidency, he pushed the envelope.  He gave maximum effort in all he did.

Roosevelt seized his potential, and as a result, he has become a modern day Titan we should all aspire to learn from.

“In this life, we get nothing save by effort.” – Teddy Roosevelt

Arnold Schwarzenegger is the epitome of a modern day Titan. Being born in war ravaged Austria just after WWII, his prospects for a bright future were slim. But, fortunately, Arnold had big dreams for his future, and was willing to put in the work to make his dreams become a reality.

Arnold desired a better life for himself, and believed deep down inside that he was worthy of such a life. As such, he backed his dreams up with faith that he could achieve what he wanted, and the dedication and work needed to bridge the gaps. In fact, his work ethic has become legend, as he was always the first person to always be in the gym, and always the last person to leave.

Arnold’s efforts paid off, year after year. Through sheer will power and effort, he became one of the youngest champion body builders in Europe. He then leveraged that success, to move to the United States, where he would go on to dominate the body building industry, winning championship after championship.

“Work your ass off.  There is no magic pill.”  –  Arnold Schwarzenegger

Striving For The Titan Zone

Not everyone will become a Titan, but anyone can.  If you watch existing Titans closely, they will reveal the secret ingredients to reaching such esteemed heights.  Of course, it doesn’t stop there, after learning from your observations; you must then apply what you learned from them to your life.

It’s not going to be easy.  In fact, it will be hard, very hard.  But hard is the name of the game.

If you want to be a Titan, difficulty and extreme effort must be embraced.

Look, here is a model from one of my educational resources. It will give you some context of the level of effort and stretching you will need to endure if you wish to become a Titan.

Just know this, the middle portion of the graph above, the existing average performance zone, is a zone you do not want to be in.  That zone is the no-zone.  It’s for no-getters, the average, and all those lovers of mediocrity.   So it’s not for you my future Titan in the making.

Final Thoughts on Becoming a Titan

They say modeling the greats is the quickest way to become great yourself.  If I could expand on that saying, I would also include the following; modeling the effort of other Titans is the quickest way to become a Titan yourself.  Make effort your secret weapon my friends, and eventually you will become more than you are. And become more than you are every day is the way of the modern day Titan.

PS – If you need more encouragement so you can give the extra effort needed to bring out your inner Titan, then you’ll love these powerful success stories.

High effort, self-discipline, and fearless action are “my things”.  If you could use a bit more of these life-enhancing attributes, or if you want to be nudged from time to time to start taking action on your goals and dreams, follow me on Twitter.